This chess variant was originally published in Games magazine under the name Survival of the Species Chess and was credited to Paddy Smith, a pseudonym of Wayne Schmittberger. It was inspired by two of V.R. Parton’s chess variants, Co-Regal Chess and Kinglet. Most of the rules of chess apply, including the starting position and the movement powers of the pieces. The one change is the object of the game.

The concept of checkmate is abolished. Think of each type of piece—king, queen, rook, bishop, knight, and pawn—as a different species of animal. Your job is to avoid the extinction of any of your species. If you don’t have at least one of each type of piece on the board, you lose. From an offensive standpoint, this means you can still win, as in ordinary chess, by capturing the enemy king (although, technically, you’ll have to complete the capture instead of just playing to checkmate). But you can also with by capturing your opponent’s queen, or both knights, or both bishops, or both rooks, or all eight pawns (that last one is pretty hard to do, though).

This means that you can never offer a trade of queens, because as soon as your opponent takes your queen, the game is over (you just lost) before you can recapture. It also means that if one pair of knights, say, is exchanged, the other knight must be protected just as hard as the king. And if your king and remaining knight are attacked simultaneously by a piece you can’t immediately capture, you lose.

As in chess, you may promote a pawn to any piece, but in this game you can even promote it to a king. With two kings on the board, you can afford to lose one of them (the same is true of queens). But if you have to promote your last pawn to move it from an attacked square, you lose, since the pawn must promote to something and cannot remain a pawn. In practice, the game doesn’t last long enough to worry about this rule.

Here’s a sample game that shows some of the tactics. It’s from a NOST (Knights of the Square table) Postal Tournament in 1988. 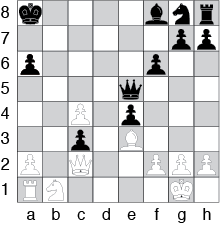 Black to move and cause one of White's piece types to become extinct in three moves.

Hexagons are the shape of choice for most connection games, Hex and Havannah being notable examples. An exception is Wayne Schmittberger’s game of Octagons, which is played on a grid with an octagon-square pattern in which the octagons have been cut in half to make irregular pentagons. 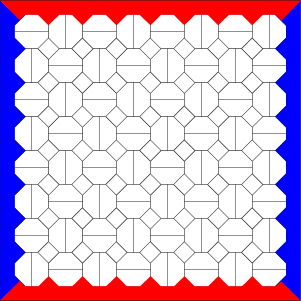 In Octagons one player is Red, who uses a red pencil, and the other player is Blue, who uses a blue pencil. Each turn, a player colors in either one half-octagon or two squares. The pie rule is in effect: One player, chosen randomly, moves first by making a move for Red, after which the other player has the choice of playing Red or Blue. Once the choice is made, players take turns normally for the rest of the game.

Since half-octagons (except near the edge) border seven spaces, they are much more important than squares, which border only four. The fact that two squares can be filled in at once does not fully compensate for this, and so it is better, early in the game, to fill in a half-octagon than to fill in two squares. But as the board fills in, positions come about in which filling in a square threatens to break an important connection. In this diagram below, for example, the two Blue regions have a loose connection that cannot normally be broken by Red, since if Red plays at A, Blue plays at B, and vice versa. But if Red plays A and can simultaneously make a similar threat somewhere else on the board, Blue will not be able to keep both connections. 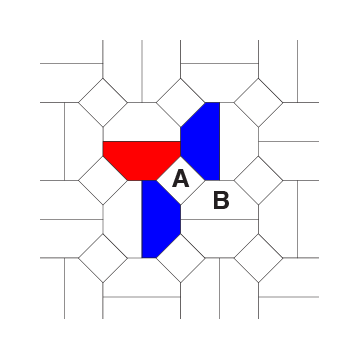 The strategy of Octagons is much like that of other connection games. Craige Schensted and Charles Titus, inventors of several outstanding connection games, summarized strategy succinctly in their remarkable book Mudcrack Y and Poly Y (Neo Press, 1975) by stating: “The best offense is a good defense.” For some reason, it’s easier to see how to block the opponent’s connections than to see how to solidify your own connections. But if you can do the former, you don’t need to worry about the latter, since it is impossible for a game of Octagons to end in a draw.

It’s also important to spread your moves out, even though it may look as though your opponent can keep you from connecting them into a solid path. If you color in spaces that are too close together, some of them may end up doing the same job; and if you find that one of your moves has become unnecessary, it’s as if you have given your opponent an extra turn.

Chu (or middle) shogi has been played since the 14th century, if not earlier. Played with 92 pieces on a 12x12 board, the game remained popular for centuries, even after the drop rule was invented for the 9x9 game that became modern shogi. Chu seems to have died out in the early 20th century, but in the 1970s George Hodges founded The Shogi Association in England, and with the help of game and language expert John Fairbairn, introduced the game to the West. Some earlier texts that had purported to describe the game’s rules were full of numerous serious errors.

Complete rules can be found at Wikipedia or in George Hodges’s Middle Shogi Manual (1992). The game’s name comes from the fact that it is larger than standard shogi but smaller than dai shogi and other large variants.

Literature on strategy is limited, but in New Rules for Classic Games (John Wiley & Sons, 1992), Wayne Schmittberger devoted 14 pages to the game, including a section on the relative values of the pieces. These evaluations were based on having played more than 100 games of chu, both over the board and by mail, as well as from studying the surviving historical game records.

Because nearly all the pieces promote upon reaching the four ranks at the far side of the board, assigning exact numerical values as in Western chess is not possible. Instead, the book presents a ranked list of groups of pieces. Within each group, pieces are deemed close enough in value that an exchange of one piece in the group for any other can be considered a reasonably fair exchange.

Here, then, is that list. Groups are ranked from strongest (1) to weakest (15), and pieces within each group are ranked from strongest to weakest. Piece names in parentheses are promoted pieces; all others are unpromoted types. A plus sign before a piece name means that it is the promoted version of the piece that follows; thus, “+rook” denotes a dragon king (a rook’s promoted value), but not an unpromoted dragon king that can still promote to a soaring eagle.

*Value varies greatly according to how close it is to promotion
**But if the player has lost his or her king, the crown prince is priceless

Some other general advice:
1. Early in the game, do not give up your lion unless you can get something more than two free king-type pieces (group 2 pieces) in return. However, the value of the free king gets closer to that of the lion as the game goes on, and in the endgame the free king is better unless the lion is near the enemy king.
2. Exchanging a strong piece (but not a lion) for two or three weaker pieces is often a good idea, but be aware that in the endgame the side with more ranging pieces will enjoy a kind of “air superiority” that makes it easier to advance and promote remaining pieces.
3. Sacrificing a piece in order to promote another piece is generally to be avoided unless both pieces are weak or unless the piece to be promoted is a kylin, phoenix, side mover, or vertical mover.

This page is devoted to games of all kinds, with an emphasis on strategy board games. Chess and shogi variants, go, and 18xx railroad games are likely topics, as well as Euro-style games such as Settlers of Catan, Tikal, and Carcassonne.

As more articles are added, older ones will be archived but will remain available.